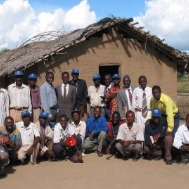 Building the Kingdom of God in the lives of children

Starfish Malawi was founded by Chris Knott in 2003. Starfish seeks to reduce extreme poverty and build the Kingdom of God in the lives of children through collaborative work within communities, schools and churches in the UK and Malawi. As its name suggests, this ministry seeks to make a difference to individuals. Starfish projects focus on Christian teaching, education, health and agriculture.

As a Christian charity, Starfish were keen to include a strong element of Christian education and support for local pastors as part of their offer. They recognised that it was good to help people in extreme poverty with practical support to help them become self-sufficient; but they also knew that spiritual and moral transformation were necessary too and that good books could play a part in this.

In 2010 Starfish set up a library in Salima, a town about an hour's drive from the capital of Lilongwe. After a positive start, in 2011 Sovereign World gave their collection a boost by supplying three hundred books to help local pastors who were keen to learn more. Over the following years the library grew with well over 260 members, all of whom were regular users, some for them travelling considerable distances from surrounding towns and villages.

The rapid growth and high use of the resource centre further stimulated demand as pastors came from miles around to visit. It was not unusual for pastors to spend a couple of hours cycling into Salima and of course another two hours to return home. So it was decided to set up satellite libraries in the surrounding regions. Sam Phiri was appointed as a coordinator and visited England to participate in the preparations. The story is described in the short video they made.

After an initial three libraries, three more were added. Chris Moffett (the Trust's Director) visited Malawi to assess the impact, working closely with Bornwell Yona, the new coordinator. More libraries are now in the planning stage. In addition, it became clear that there was also a need for books in the local language of Chichewa. Unfortunately, there is a dearth of really appropriate material in Chichewa, so the goal is to work with pastors to develop or translate material specifically designed for their situation. Translation work is now in progress.

In order to boost the smaller satellite collections it was also decided to provide additional books that could be taken to these libraries for a few months and then replaced with others, offering more variety and keeping the collections fresh.

Libraries are located in churches and sometimes pastors' homes, whichever provides the most secure location. In one of them, the Ikea bookcases that we provided had been severely damaged by hungry termites; so we will be sending out replacements and arranging for termite proof paint to be provided.

At the beginning of 2016, one of the pastors in this area wrote to us explaining that although he was benefitting from the books, his family and community were struggling with the lack of physical food. This is not within the remit of the Trust, but having discussed his situation with our Starfish friends we were able to facilitate one of their projects to provide irrigation pumps to help the local people to grow their own food more productively. The funds for this were donated by Eynsford Baptist Church.

One of the very positive outcomes of the libraries is that they have stimulated practical cooperation and good relations between churches in the area. Churches in Malawi are, for the most-part, small but numerous. The libraries, provided a catalyst for leaders to get to know and to encourage each other. A natural development from this was the provision of training to address common concerns.

Chris Moffett spent a couple of days with the pastors when he visited Malawi. Christians in an African culture experience very different challenges to those we face in Britain. Family ties play a much more significant role in their lives. There is no State Pension provision for the elderly, and children are expected to provide care for their parents and take them into their homes when they are frail and unable to look after themselves. Families tend to be large. A daughter who gets married and sets up a new home with her husband may be expected to take in a younger brother or sister to relieve the pressure on the parents. For the newly-weds to refuse, saying that they feel they need some time to adjust to married life, would invite conflict. That would fly in the face of cultural expectations.

How are such issues to be managed in a Godly way - leaving and forging an independent life and at the same time honouring parents?  It is one thing to be asked to take in a younger child. It is quite another to be told by your parents that you must do so, and have them arrive at your door. Of course, closer family ties can also bring great blessing. For couples who marry and have their children while they are young, grandparents are available to help in the upbringing of their grandchildren, perhaps allowing the mother to pursue educational opportunities

Hearing about these challenges is a powerful reminder that we need to select books that are culturally sensitive and relevant. In particular we also need to facilitate pastors and teachers within these cultures to provide books of their own.